Tsukiumi is one of the heroines of the story and is Minato's fourth Sekirei. She first appears to Minato in a dream saying that she would kill him; this was due to her desire to be the strongest Sekirei without being winged by an Ashikabi as well as misunderstanding how a Sekirei emerges. (She was under the impression that she would have to sleep with the Ashikabi.)[1] When they finally met, she was persuaded into becoming his Sekirei. She refers to herself as Minato's 'legal wife' and is very possessive of him. Tsukiumi had a one-sided rivalry with Homura, whom Tsukiumi considers her rival (she was apparently defeated by Homura on their very first confrontation; he then advised Tsukiumi to find her Ashikabi instead of wasting time fighting, and Tsukiumi has been looking forward to settling the score ever since). Tsukiumi once confided to Asama Miya that she still wants to be the strongest, but it is so she can be with Minato forever.[2] Her name (the combination of the Japanese words tsuki + umi) literally means "moon sea" (not to be confused with "lunar mare" - 月の海).

Tsukiumi has long blonde hair with blue eyes. She is dressed in a black dress with a white underdress which shows her cleavage, wears a choker on her neck, and has long brown boots with black stockings. Because of her short skirt her panties are often exposed which led to her being given the nickname "Panties flasher" by Homura and Kazehana. She wears a light blue nightgown when she going to bed. At Izumo Inn she is often dressed in a maid outfit she got from Uzume to do chores.[3]

Tsukiumi is a Sekirei with a tsundere personality. She is the most aggressive of Minato's party and has a very short temper; she rarely smiles. She was introduced as the first Sekirei that wanted to become the strongest without the help of an Ashikabi. She even stated that she was willing to kill her future Ashikabi if she would ever react to him/her, due to her hate towards Ashikabis.[4] She changed a lot after getting winged by Minato and easily gets jealous when Minato comes in contact with other women, due to her feelings for her Ashikabi. She proclaims herself to be Minato's only legal wife which sometimes causes rivalry between her and Minato's remaining Sekirei. She often competes with Musubi attempting to gain the sole right to be called 'Minato's legal wife'. This is because she stated after kissing Minato for the first time that he was not only her Ashikabi but her husband. Aside from this, she gets along well with Minato's other Sekirei; especially those she considers her direct rivals, Homura and Musubi.

She also has an honorable side, in that she seems to adhere to the fundamental rule of Sekirei one-on-one combat. Tsukiumi also seems to despise involving innocent civilians or bystanders in such confrontations, as seen when she canceled her attack on the veiled Uzume when Kazehana came by (Tsukiumi was unaware that Kazehana was Sekirei Number 3). Furthermore, she has a tendency to show a softer nature around Minato and has stated in a private conversation with Miya that she wants to become the strongest in order to stay forever with Minato.

Tsukiumi doesn't like to be touched by anyone except Minato. She gets mad when Musubi grabs her breast in the bath or while undressed. Minato is the only one allowed to touch her body and once she went so far as to place Minato's hand to her exposed breast; even so, shortly afterward she considered this a brief moment of weakness.

Tsukiumi's most notable character trait is her pride. She sometimes undertakes actions she knows are foolish simply because her pride won't let her back down. Fortunately it is a trait she is learning to overcome, such as when Kusano managed to convince her to help #95 Kuno and her Ashikabi escape even though it went against Tsukiumi's principles.

Her speech pattern is different from the others, as she speaks in Old Japanese Language. (To reflect this on the English dub, she speaks in Shakespearean English using words like "Thou" or "Thee" in place of typical pronouns.)

In the sequel spin-off, she expresses a desire to bear Minato's children after learning about Hibiki and Hikari's pregnancies. Though her attitude prevents her from directly admitting this.

Tsukiumi has the ability to control and manipulate water and is capable of generating large quantities of it directly from her person or the surrounding air.

The incantation for Tsukiumi's Norito is:

This Water Represents My Pledge, Purify The Evil Residing In My Ashikabi

When Tsukiumi uses her Norito the first time, she also chants an extra piece:

As a storm approaches, whitecaps grow, and tides rise suddenly, The Final Wave! 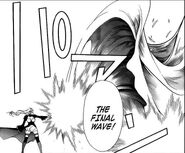 Tsukiumi was living together with her tuner Miyajima before she moved to Izumo Inn. According to her she was a very strict person and made Tsukiumi tremble in fear everyday.[11]

Tsukiumi remembered parts of her childhood once she was exposed to a Jinki; she remembered being told to become strong by Miya while still an infant.[12]

Retrieved from "https://sekirei.fandom.com/wiki/Tsukiumi?oldid=19051"
Community content is available under CC-BY-SA unless otherwise noted.