Edit
watch 01:36
We're Getting Mutants in the MCU - The Loop
Do you like this video?
Play Sound

Benitsubasa (紅翼), is Sekirei #105, also known as the "Red Sekirei" (緋い鶺鴒, Akai Sekirei)[1] and is a member of the Third Generation Disciplinary Squad. After her fight with Musubi and Yume (who she believed to be Musubi) she fosters a strong hatred towards Musubi due to being thrashed in her fight against Yume. She then spent the whole third match of the Sekirei Plan looking for Musubi to finish their fight, beginning a rivalry with the other close combat type Sekirei in the process. Although the rules of the Plan say not to attack Ashikabi, she is fond of breaking this amongst other rules, and has a hot-headed personality. Her name (beni+tsubasa) means "crimson wings" literally.

She wears a kimono-like shirt with one sleeve missing, and has pink hair which she wears in a side ponytail with two daisy clips, as well as pink eyes. Her body is very athletic, more toned than most other Sekirei but not overly muscular. She has small breasts that haven't grown by a single millimeter and is an A cup (according to Haihane). in the English dub of the anime, Kazehana calls Benitsubasa "Pettanko" ("Washboard") in response to being called "Obaa-San" ("Grandma") before their fight. She is a younger Sekirei that has the appearance of a cheerful teenager though her appearance doesn't reflect her personality as she is short-tempered, unlike Haihane who's always calm and has fun teasing Benitsubasa.

Benitsubasa is a very short-tempered Sekirei prone to violent outbursts and poor impulse control. She's aggressive to the point that she doesn't show any mercy to either Ashikabi or Sekirei as she was willing to kill both Minato and Higa even though it's strictly against the rules to attack an Ashikabi[2]. She has a habit of sticking her tongue out while fighting (one of many behaviours she employs to mock her opponents) and claims to hate those who are stupid in her eyes (such as Musubi) although she herself has the occasional dull or slow moment. She developed a deep hatred for Musubi after their fight during the night of Haruka and Kuno's escape, and rushes for Musubi on sight for a proper rematch with the goal to humiliate and kill her[3]. Out of the three Disciplinary Squad members she is the only one who openly admits that she "loves" her Ashikabi. She has stated that she wants to "open his eyes" (somehow make him attracted to women through her charm and good looks, as Haihane said he was gay, which Benitsubasa did not refute) and then openly admitted that she is plotting to kill both Haihane and Karasuba, so she can have him all to herself[4].

She is a hand-to-hand fighter, similar to Musubi, but as stated by Haihane they are complete opposites: Benitsubasa is a well-trained martial artist, who always fights to kill, while Musubi fights more instinctively until she is trained by Miya. Like Musubi she is superhumanly strong, even by the higher standards of Sekirei, and she can use her immense strength to create shockwaves and earthquakes for longer ranged attacks. She has comparable speed, reflexes, and durability to Musubi as well. 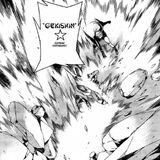 Nothing is known about her past minus the commonalities between all Sekirei due to their affiliation with MBI. At some point prior to the Sekirei Plan she joined the Disciplinary Squad and was winged by Natsuo.

Community content is available under CC-BY-SA unless otherwise noted.
Advertisement