Amebane, also known as Sekirei #13, appears during the Fourth Match of the Third Stage.[1] His Ashikabi is Yashiro Itsuki. He is so focused on taking Shiina down and take his title from him that he even disregards the single purpose of the match, finding the Jinki. Even after the use of his Norito he is overpowered and consequently terminated by Shiina.[2]

Amehane is a slim young man with a cape over a black top with wrist length gloves, a light hair color and ankle length pants. 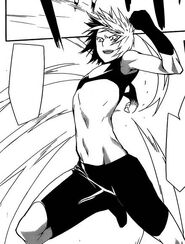 Amehane on the first appearance is meek and silent who follows his Ashikabi around. But it appears that he is a bloodthirsty and sadistic Sekirei who even despises his Ashikabi and refers to her as a pig, using her only as a tool to unleash his true powers as a Sekirei.[2][3][4]

Amehane is a close-ranged fighter with superhuman strength and speed.

His Norito is "These are the palms of my pledge, by my bare hands destroy the foes of my Ashikabi."[2]

Nothing is known about his past.

Retrieved from "https://sekirei.fandom.com/wiki/Amebane?oldid=18895"
Community content is available under CC-BY-SA unless otherwise noted.